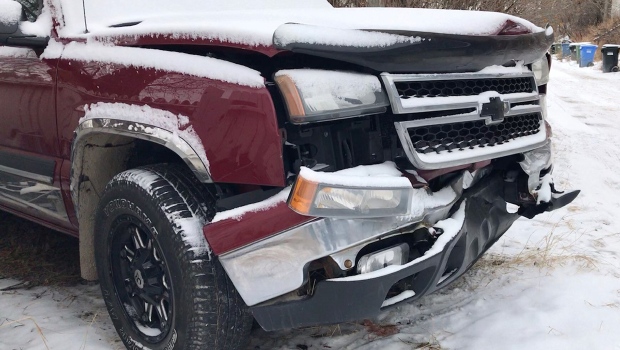 CALGARY —
Barry Bigelow says he was in the wrong place at the wrong time and is now unable to pay to repair his truck that was damaged in a crash with a stolen vehicle.

Bigelow was heading northbound on Barlow Trail near Memorial Drive on Nov. 2 when he says a BMW travelling in the opposite direction ran a red light and the two vehicles collided.

“And I drove him about four, five feet out of the way,” recounted Bigelow. “Then my truck went ahead about 15 or 20 feet away.”

The 80-year-old says five police vehicles were on scene immediately and officers arrested the driver of the BMW. He says police told him the vehicle had been stolen.

Bigelow’s only monthly income is a $680 pension, so he opted for cheaper, basic auto insurance without collision or comprehensive coverage. His policy won’t cover the cost to fix his truck.

He’s already had to pay more than $850 to retrieve the truck from the impound lot and tow it back to his daughter’s home.

“We definitely feel like we’re in limbo,” said Gloria Bigelow, Barry’s daughter. “I feel like he’s been victimized twice — once by the accident, and now by the authorities.”

Bigelow’s insurance company is paying for his treatment for whiplash, but his policy doesn’t cover any property damage.

The Insurance Bureau of Canada (IBC) says Bigelow doesn’t have many options because of the policy he chose. He can pay for the repairs to his truck out of his own pocket or he can sue the other driver involved.

“If that person doesn’t have insurance or if it’s a stolen vehicle, then you would have to go after that at-fault driver or the driver of the stolen vehicle directly for those damages,” explained Rob de Pruis with the IBC.

He says Bigelow’s situation is an unfortunate reminder for people to be aware of what their auto insurance policy does or doesn’t cover.

“You really need to take a look at what your vehicle is worth, what are these coverages providing for you and what are some of the benefits of having these coverages when weighing the value of your actual vehicle and what your financial system will allow.”

Bigelow’s family is now collecting money for the man, hoping to cover the costs he’s already incurred and get him back on the road. The Senior’s Fund for a Replacement Truck and Fees GoFundMe campaign is attempting to raise $11,023 for Bigelow.

“It’s heartbreaking,” said Gloria. “He’s an 80-year-old vulnerable man who doesn’t have a lot of resources.” North American Collision Repair Equipment Market, 2020-2026 with 2019 as the Base Year – ResearchAndMarkets.com The 10 best car insurance companies in the US for 2020